The substance was taken from a fresh mushroom for sale in the market. It was ground slightly with lactose powder to disguise it for the rest of the group. In doing so, the Roman Catholic ritual of communion came up very strongly.

We believe that all mushrooms need to be triturated higher than 4 rounds (C4), because that is the realm where they best work. We took Shiitake to C5 over two days and then two weeks later another two rounds to C7.

As you read the following, know that you are being guided by the substance itself, much in the way that it revealed itself to us.

Hypothesis: The Core Issue is a traumatic, irreconcilable event leading to psychosis and/or cancer. A remedy for psychotic states. A remedy for cancer arising from severe mental/emotional trauma [see Hamer — German New Medicine]. A state of chaos: mentally it leads to psychosis; physically it leads to cancer. For the psychotic breaks in bi-polar people. Dark or Light; no in between.
  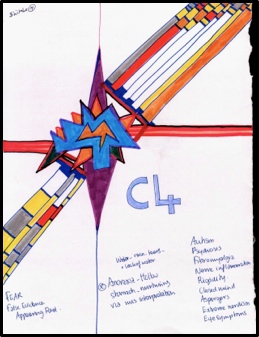 DISCUSSION OF THEMES THAT AROSE

An Incomprehensible event. You won’t get over it. It won’t get better. You can’t stay with that reality. It can’t be contained. Psychic mental/emotional event that is horrifically traumatic.

Plastic faced TV newsreaders who are smiling while reporting the most horrible news. Disconnected from reality.

Rigidity in response to horrific trauma. And that rigidity creates a continuous state of compression/contraction that does not allow resolution.

Black hole. A hole in the center. “The hole is sitting there waiting for you, until you get through.” The vortex. “A picture of a road in front of me; everything is unclear; in front of you is this little hole and everything is dark, and there is only this road behind this hole. The sides of the road are like tentacles.” Persephone rising from the dead. “Dark hole in the ground; the edges are white.”

The color white. White rage—fanaticism; killing, annhilating with absolute rigidity to defend an ideology or position; white hot coals; white houses; white space, white wings and white feathers. Snow and ice and white; Swan Lake. “I needed light on the bowl; I was in shadow.” “Drawing with a white pencil on the white paper.”

A situation that cannot be contained. You split, spiral or go wild; go crazy; or drug yourself into not seeing. Staying in the “party mode” to avoid the deep, dark, dangerous place that is too scary to be looked at. Skirting the edges of the dark. Sometimes you just don’t want to be present; it can be costly.

TOPICS OF CONVERSATION DURING THE PROVING

Irritation with others leading to rage; murderous rage. Revengeful actions over slights. Desire to start a fight. Sibling rivalry and bickering that goes dark and murderous. “Dreamt I was walking toward a wall, with multiple photos of a man I had killed in an accident….Then someone said, ‘This is the daughter of the man that you killed.’ I looked at her and told her how sorry I was and started to cry.”

Scraping the bowl like she wants to kill the substance; get it ALL.

A client came home at 16 years old to find her mother in the family car inside the garage, gassed by the exhaust fumes, death by suicide. How can you reconcile that? How can you contain that? This is a situation impossible to contain, understand or absorb. She became severely bipolar and had multiple psychotic breaks. “She would walk the roads at 3 and 4 am; and in her psychotic reality there needed to be a yellow line down the middle for her and she had to walk on it naked. She had to be naked in the street for 3 hours and if she could not do this, bad things would happen. And the rest of the world could not let her have three hours for fear she would get killed. She told her friend that she believed she would save humanity if we let her do it.”

A break between the mental-emotional/psyche world and the body/soma. You don’t feel connected with your body. Very difficult to stay in the body.

“An unclear curtain; I can’t see through it.” “A transparent barrier. A boundary that is speckled; not solid.” Unwilling to see something. You can’t see it. It’s too much to see. “Felt discomfort in eyes, like staring at what I was doing was disturbing. Felt the presence of something.”

Cancer: the “solution” to an irreconcilable situation inside. Two opposing forces create the situation. A third part is a barrier. Is it created by the two opposing forces–by one of the sides, or is it a third character in the drama? Killing one side or the other with chemo does not solve the problem; it makes both sides weak. 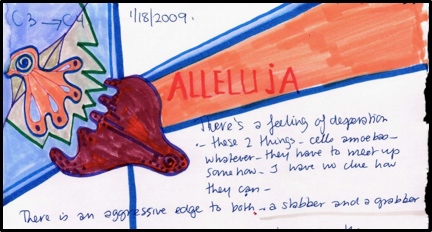 Stem cells: they look like cancer cells. Cancer cells are viewed as the enemy. “If you see everything as an enemy, what choice do you have? You have to change the way you look at it.” “Every cell can become cancerous. The cancer is the body saying something is not right here; let’s go back to the beginning where we have the choice to do it right again. But the cell that it makes cannot quite do it; cannot quite start over.”
 

Cancer patient who had first chemo yesterday described it as a war going on inside your body.

The conflict is known; what do I do here? Why am I in this life? Fly me to the Moon.

Loss of direction. Getting lost. “The Short Bus,” (a movie about Retarded people).

Down the rabbit hole. Fascia as the matrix; the fiber system of the body.

Drawings of arrows. Piercing the barrier or finding the holes. Arrows pointing direction. Drawing of twin spirals; drawing to stay present. Invasive; what goes on? Something dangerous is coming down; don’t know what but it is not good. 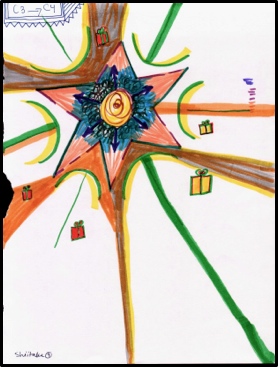 “Chaos when it comes, and we let it in; it is a portal into another way of knowing; like the eye of the vortex. A hole that cannot be filled…You have to get comfortable with the chaos…just let it be and then you pass into something else.”

“I have never been psychotic but I was with psychotic people in the hospital. They have a complete logic inside their psychosis. It makes sense to them.”

“Do I have what I need? Will the substance please guide me through. Into the Holy of Holies. ‘I stay beside you; and I see the path.’ I feel like I should be wearing long purple robes, protected by ritual; not so raw.”

“Reconcile that which we do not (or cannot) comprehend. I end up in the white space. It is an Armistice; it is a pause.” “Irreconcilable differences. Some things are just not reconcilable. A feeling that I could go into a complete white rage about everyone and everything…the white hot coals, where new life comes from.”

“The image of a big mind way out in space and a little mind down on the ground, calling to it, ‘Come down. Join me.’ Incarnation. But once the two become one, there’s no longer two. Confusion. What’s going on? Who am I? Everything’s happening to me, too fast. I’m scared. I’ve lost my place, my bearings. The frightened piece tries to leave.”

Hemorrhoids. Joking that they should be called Assteroids. Two satellites crashed in space and fell to Siberia.

Theorizing that this is possibly Robin Williams; “he is almost psychotic; he is semi-functional in real life (our proving was done before his death). So manic and all over the place. He is bipolar off medication; on medications he cannot do his comedy. To work, he has to be off drugs.” Starred in The Fisher King, where Jeff Bridges plays a talk show host who encourages violence; a man then randomly kills Robin Williams’ character’s wife in front of him, and he goes completely delusional as a result. Understandably so. A shocking, traumatic event that shatters your world, your reality.

Songs/Music that came up strongly during the proving:
Swan Lake music
Master of the House (Les Mis)
Happiness is a Warm Gun (Beatles)
Anthem (Leonard Cohen): “There is a Crack in Everything; that’s how the Light gets in.”
Alleluia (Leonard Cohen)
The Blues (genre)

Cancer is the somatic expression of the irreconcilable conflict; psychosis the mental/emotional expression.

Drawing of the Matrix, like fiber bundles in the body with transverse connections between the bundles of fiber. “I want the group to be whole. People keep walking off. My tentacles are out like I have to extend myself to keep track of them.” The mushroom lives on the cellulose; the fiber/fascia of the wood. Saprophyte.

RUBRICS (those with a * are new rubrics)

NATURAL HISTORY
Shiitake (shee-TAH-kee) mushrooms are a culinary rage in the United States today (you can even buy kits for growing your own), but have been important in Chinese culture for thousands of years. One of the earliest recorded uses of shiitake (Lentinula edodes) dates as far back as the fourteenth century, when the Chinese physician Wu-Rui described it as a food that accelerates vital or “spirit” energy (known as Qi in Chinese), staves off hunger, “cures cold, and penetrates into the blood circulatory system.” Today, these attributes are collectively taken to mean that shiitake makes a person more lively. Wu also stated that shiitake was “good for treatment of Heart Troubles . . . beneficial to [all forms of] Malignancy, likewise certainly [good for] Snake’s poison.” For the past thirty years, scientists have been investigating some of these uses and have amassed evidence that shiitake can help the body fight heart disease, cancer, and viral diseases.

CANCER
In 1969, researchers at Tokyo’s National Cancer Center Research Institute isolated a polysaccharide compound from shiitake that they named lentinan. Doses of 0.5 to 1 mg lentinan per kg of body weight caused tumors in laboratory mice to regress or disappear in 80 to 100 percent of the subjects. Researchers have since demonstrated that lentinan works by stimulating immune-system cells to rid the body of tumor cells. In clinical trials, lentinan administered with chemotherapy has increased the life span of cancer patients, improved the effectiveness of chemotherapy, and kept tumors from growing. In Japan, lentinan is approved for use as a drug to prolong the lives of patients undergoing chemotherapy for stomach cancer.
Additional studies have shown that when shiitake mushrooms make up 10 percent of the daily diet of cancerous mice, tumor growth is inhibited by nearly 40 percent. When shiitake constitutes 30 percent of the diet, tumor growth is inhibited by nearly 78 percent. Researchers have concluded that the entire mushroom stimulates immune cells such as macrophages and T cells, as well as natural killer cells, and contains compounds that block the formation of carcinogens from nitrates that are found in many processed meats and some vegetables.

For a complete explanation and description on Triturations, as well as C4 homeopathic philosophy and theory, we recommend that you read The Trituration Handbook.

Case:
This is not a “cured” cases but is presented to show our thinking and potential usage. This case was given the remedy made from the C5 and given within the 2 weeks after the trituration.

A., a young woman, anorexic. A friend of one of the triturators, who was going through a lot of emotional turmoil and losing a lot of weight. She was tall and very thin. The triturator thought this remedy matched her friend in a number of ways and felt this remedy was indicated for anorexia. The friend took one pellet for three days and was able to then sleep through the night and felt quite tranquil. She took it a few more times, and asked for more several times, saying it really helped her. Afterwards she had was seen by another of the triturators who found her to be in a good state.